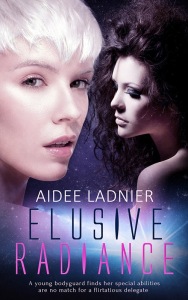 Aidee Ladnier had a lovely guest post on this blog last month (Why I Love Science Fiction Romance) and I was curious enough to pick up her new F/F sci-fi romance novelette when it was released yesterday.

Elusive Radiance is a delightful read, well written and quick-paced. There is an erotic tension between the two main characters right from the start, and a satisfying romance that sustains the tension through to the end. The narrator, Anais, is a genetically engineered security agent, considered non-human and property of the Levantar Los Ojos Spindle. She is assigned to guard Savea Blackmun, a delegate from the backwater colony of Helion. Savea is beautiful and confidently charming, but unfamiliar with the circles she must move in; Anais offers to be guide as much as guard, and her erratic ability to turn invisible proves very useful.

In more ways than one.