Goddesses of Love, Lust and Liberty

Jacquotte Fox Kline’s new fantasy trilogy Down Deep Inside blends Christian and ancient Greek mythologies, establishing between Heaven and Hell a city-realm in Elysium where Aphrodite rules over a renegade New Order of succubi and incubi. This is a matriarchal realm where people are free to love as they wish, in contrast to the heavily regulated patriarchies of Heaven and Hell.

I love the titles and adore the covers of these, and am currently reading the first of the trilogy, Down Where The Blue Violet Beauties Bloom. Clearly a lot of thought has gone into the mythology, something that I also incorporate into my writing, though I lean towards Artemis and Lilith rather than Aphrodite. I felt compelled to write to Jacquotte with some questions. Here are her replies. 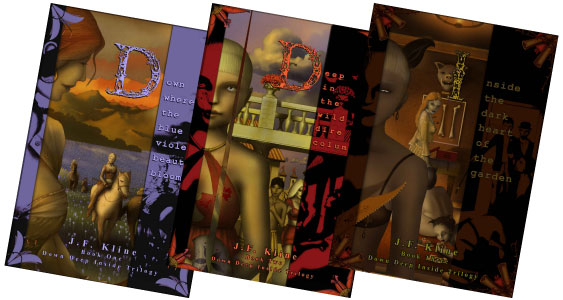 FJF I find the idea of Aphrodite as a goddess of succubi an intriguing idea, although I see her as wilful rather than rebellious. Associating her with the succubi emphasises their potential as lovers rather than demonic creatures of lust. However, for a goddess of a rebellious matriarchy, surely the obvious choice is Lilith, who was cast out of Eden for her defiance – and yet you have her submitting to Hades, the ruler of Hell. Instead of the City of the Lady, could you not have had the City of the Ladies, ruled in an uneasy alliance by fierce, aromantic Lilith and capricious, romantic Aphrodite?

JFK That sounds like a lovely concept. You have two boys (Deus and Hades), so why not two girls with a similar dichotomy of character.

The “official party line” is that Lilith submits to Hades. In book three (set in Tartarus), the text suggests that Lilith can wield influence to protect her own (the traditional succubi). The lore on my website says Lilith seduced Hades when she arrived on Earth, suggesting she turned him darker and more parasitic than the relatively even-handed Greek god of the old Underworld.

As Anubis notes in book one, Lilith also changed the Underworld itself. She tidied it up quite a bit, like an evil housewife, compared to Dante’s rendition of relative chaos.

FJF Do Hermaphroditus, Eros and Priapus feature in the world you’ve created? I feel they could create an interesting gender balance if allied with Aphrodite.

JFK Good question, and I agree! Eros and Priapus are significant characters with active and important plot points in book two, which features far more male characters in general. Priapus has the chance to unleash his magic staff at one point, indulging in a personal fantasy.

Hermaphroditus is mentioned in books one and two, but unfortunately I never bring that interesting character into the living picture. My personal preference is to avoid an overwhelming cast of characters, but that’s a complicated topic.

FJF In a realm that exists between ‘good’ and ‘evil’, a truly demonic succubus is not an option. What is a succubus, then? Does she feed off emotional energy? I have this idea that there are different kinds of emotional energy that a succubus could feed off:

To make things easy to understand, I mainly draw a two-sided distinction between pleasure and pain. Aphrodite’s rebel succubi tend to prefer the sweeter-tasting energy of pleasure and lust. Lilith’s traditional succubi (in Tartarus, the setting for book three) are willing to stoke, goad, and twist a slave into bitter anger and hate, the better to feed from those strong but poisonous emotions.

So there is a parallel with Star Wars (Jedi and Sith). The ethics of the treatment of submissives are an important part of the conflict and corruption in the Lady’s city.

Jacquotte was an avid reader as a child. Her favorite books were Tolkien’s Hobbit and Lord of the Rings trilogy, which she finished at the age of eight. As a teenager, she created adventure stories for high fantasy role-playing games. She was a high school spelling champion and took a few writing classes in college, but she didn’t write real fiction until joining an online group in her early 30s. She learned oodles in the group, honed her skills, wrote countless critiques, and won a few contests.

A Sci-Fi & Fantasy author and lyrical poet with a mild obsession for vampires, succubi, goddesses and Supergirl.
View all posts by Frank →
This entry was posted in Guest Posts, Succubus and tagged aphrodite, Down Deep Inside, fantasy, Jacquotte Fox Kline, lesbian romance, lilith, trilogy. Bookmark the permalink.

2 Responses to Goddesses of Love, Lust and Liberty