Following on from my review of A Very Civil Wedding, I am delighted to have a guest post by the author – V.T. Davy of Liberation Publishing. 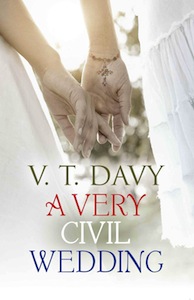 When Francis asked me to guest blog on his site, he mentioned a post (Vampyres and Lesbians and Lesbian Queens) that he had written in August 2013 that quoted Lord Tebbit’s question from the debate on same-sex marriage. If you missed it, what the Tory peer said was: “When we have a queen who is a lesbian and she marries another lady and then decides she would like to have a child and someone donates sperm and she gives birth to a child, is that child heir to the throne?”

I use this quote at the start of my novel, A Very Civil Wedding, as it is one of the questions the book answers. The simple answer to Lord Tebbit’s question is: “Yes, a lesbian monarch’s child would be heir to the throne”. The 2008 Human Fertilisation & Embryology Act clarifies this. The rule is that that both women are treated as the parents, and any children, conceived or born to either party whilst in a same-sex partnership, are legitimate. In the case of the Royal Family, this would mean that the child would take their place in the line of succession.

More interesting is the question of what Britain as a nation would do if the heir to the throne was gay or lesbian and wanted to marry, or make their relationship official. Britain has had gay and lesbian monarchs before (Edward II, James VI, and Anne), but in all cases they married a member of the opposite sex and kept their affairs out of the public eye. Partly this was due to the prevailing view of homosexuality, and partly it was due to the law not enabling the relationship to be recognised. There are no such barriers today. A member of the Royal Family can have a legally recognised same-sex marriage or civil partnership and, as I have already said, that partnership could legitimately continue the royal line.

I tend to think that we are a much more tolerant nation than we were. A great many people have now attended civil partnership ceremonies for friends and family and, during 2014, we will start attending the first gay marriages in Britain. I have yet to hear anyone say that they didn’t enjoy a civil partnership ceremony, just the same as they enjoy a traditional wedding. However, although we are happy to attend our son, daughter, cousin, friend’s big gay wedding, would we be as tolerant when it was the heir to the throne who was getting married? I hope that the majority of the British public would be just as pleased to celebrate a same-sex wedding for an heir to the throne as they were to celebrate William and Kate’s wedding in 2011.

My research led me to consider a number of viable options for Princess Alexandra and her partner, Grace Stephens:

All four options have public and personal ramifications for the Princess and her partner. Would option 1 really be viable with today’s paparazzi fuelled media? Would option 2 be realistic, given the strength of opinion on the issue within the church? How would the British people react to option 3, never mind the church? And why should the Princess abdicate, as in option 4, simply for marrying the woman she loves?

To discover which option I chose for Alexandra and Grace and how the British people reacted, you will have to read A Very Civil Wedding.

Further reading: Take a look at V.T. Davy’s post Gay Marriage and the Nature of Marriage Itself.