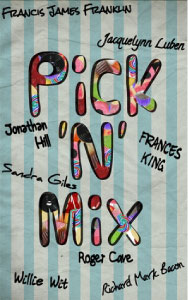 I’m delighted to have a short story published in an anthology, the proceeds of which will go to the charity Eaves for Women (more details below).

My short story is An Aromantic Romance. This is a sweet little love story about Andy, who’s a romantic, and Nina, who’s aromantic.

My browser is telling me that that’s a spelling error. Aromantic. Microsoft Word was telling me the same thing. I don’t know what word processor the editor of the anthology was using, but I was rather dismayed to read:

She really helped me to come to terms with being a romantic.

What? No! Here’s what I should have read:

She really helped me to come to terms with being aromantic.

Spot the difference? Spot the way the sentence now has completely the opposite meaning?

Or is it a mistake? Maybe it’s deliberate, the first hint of a conspiracy to erase aromantic reality…

Search for ‘aromantic’ on goodreads and it will say, ‘Did you mean: aromatic,’ before giving a link to this book only: The Aromantic Guide To Making Your Own Natural Skin, Hair And Body Care Products. Somehow I doubt that has anything to with romantic identity.

Actually, if you look under stories, there are two results, one being a link to extracts from my novel, the other being a poem: Paint me into the sunset. It’s a sweet little poem, and the description at the bottom says, ‘I wanted this to come across as aromantic,’ which is clearly an error, a cut-and-paste error rather than a spellcheck error.

(Let’s not argue about ‘spellcheck’ which my browser is also complaining about.)

Type aromantic into Google (or Bing also, I think) and the first three results are links to http://www.aromantic.co.uk, which is fair enough but again nothing to do with romantic identity. Aromantic as a contraction of aromatic and romantic is a fairly common usage. Most of the search engine results relate to cosmetics or aromatherapy. Some results confuse the phrase ‘a romantic’ with the word ‘aromantic’ in the same trying-to-be-helpful way as the spellchecker.

After that it links to AVEN (Asexual Visibility and Education Network) which gives one definition for aromantic:

An aromantic is a person who experiences little or no romantic attraction to others.

This is quite distinct from asexual:

An asexual is someone who does not experience sexual attraction.

Approximately 1% of the population is asexual.

Still, search results relevant to romantic identity are much higher up the results list than they were two months ago, so maybe this use of word will win out in the end.

Eaves leads the way in exposing and addressing the overlapping issues of domestic abuse, sexual violence, and exploitation of women in the UK.

The Poppy Project was set up in 2003 to provide high-quality support, advocacy and accommodation to trafficked women; that is, women who have been brought into the UK to be exploited in some way. This could include but is not limited to sexual exploitation, labour exploitation, forced illicit activities and organ harvesting.

A Sci-Fi & Fantasy author and lyrical poet with a mild obsession for vampires, succubi, goddesses and Supergirl.
View all posts by Frank →
This entry was posted in An Aromantic Romance, Sexuality and tagged anthology, aromantic, charity, eaves, human trafficking, romance, search-engine, spellchecker, women. Bookmark the permalink.